Robert Burns is Scotland's most famous poet. In Scotland he is known by many names including "Rabbie Burns", "The Ploughman Poet" and "The Bard".

Robert Burns was born on 25 January 1759, in Alloway, South Ayrshire, Scotland. The house where he was born still stands, and was built by his father William Burness. William was a tenant farmer, and his wife Agnes Broun, Burns' mother, was a daughter of a tenant farmer.

Later Robert would change the spelling of his surname from "Burness" to "Burns".

The Cottage Where Robert Burns Was Born

When Burns was seven his father sold the house and took the tenancy of the nearby Mount Oliphant farm. The farm consisted of 70 acres, but this a big mistake. The land was not very productive, and the family suffered severe hardship.

The hard manual work, at such a young age, severely affected Burns' health for the rest of his life.

Burns' received little formal education, but luckily his father was self-educated and taught his children.

In 1774, helping the family at harvest time was a young girl, called Nelly Kilpatrick. Nelly was the inspiration of Robert Burns' first poem, "O, Once I Lov'd A Bonnie Lass".

In 1777, William Burness moved the family to a new farm at Lochlea, near Tarbolton. This was much more productive and the family's situation improved considerably.

In 1779, Robert Burns joined a country dancing school. His father disapproved of this.

The next year, in 1780, Robert and his brother Gilbert formed the Tarbolton Bachelors' Club. This was a debating club. One of the club's rules read as follows:

"Every man proper for a member of this Society, must have a frank, honest, open heart; above anything dirty or mean; and must be a professed lover of one or more of the female sex. No haughty, self-conceited person, who looks upon himself as superior to the rest of the Club, and especially no mean spirited, worldly mortal, whose only will is to heap up money shall upon any pretence whatever be admitted."

In 1781 Robert Burns was initiated into the Freemasons, an organization he was a member of, for the rest of his life.

In Mauchline Robert Burns met a group of girls, who were known as "The Belles Of Mauchline". One of these girls was called Jean Armour.

Jean Armour As An Old Woman

In 1786 Burns had a brief affair with a woman called Mary Campbell. History knows her as "Highland Mary".

Another Portrayal Of Robert Burns And Highland Mary

In 1786 Robert Burns published "Poems, Chiefly in the Scottish Dialect". This was very well received and Burns was suddenly a household name throughout Scotland.

Title Page Of Poems, Chiefly in the Scottish Dialect

Burns was invited to Edinburgh to help prepare a new edition of the poems, where he made a good impression and was received very warmly.

Whilst still in Edinburgh, Burns met James Johnson. Johnson was an engraver and music seller who was determined to preserve old Scottish Songs. This was a project close to Robert Burns' heart, and he became a major contributor.

A Page From The Scots Musical Museum

Burns returned home in 1788. There he resumed his relationship with Jean Armour, and took a lease out on Ellisland Farm.

As security against the precarious nature of farming, Burns trained as an exciseman. Then in 1789 he began to work for the Customs and Excise service.

"Tam O'Shanter" was written by Robert Burns in 1790. It is considered a classic narrative poem. The poem tells the story of a man, called "Tam O'Shanter", who ignores his wife's warnings about his heavy drinking, and stays too long at a public house.

When he finally leaves the public house Tam O'Shanter travels back on horseback, through a raging storm. On his journey he encounters a group of witches and warlocks. After a chase Tam O'Shanter manages to cross a bridge to safety, but his poor horse looses it's tail in the pursuit.

In 1791, Burns gave up the lease on Ellisland Farm and moved to the centre of Dumfries.

This marked the end of Burns' farming career. Robert Burns continued with both his poetry and collection of traditional Scottish songs.

The hardships of Robert Burns' early life began to take their toll, combined with his drinking, Burns' health was in serious decline.

The Room Where Robert Burns Died

Initially Burns was buried in St. Michael's Churchyard in Dumfries.

Later in 1815 his body was moved to the Burns Mausoleum, where it rests to this day. Jean Armour, Burns' wife, died many years later in 1834 and was buried next to him.

Over the centuries Burns' reputation has grown. With emigration from Scotland many statues to his memory have been erected throughout the world.

A Statue Of Robert Burns In Dunedin, New Zealand

Around the 25 January, the birth date of Robert Burns, celebrations of his life take place. These celebrations take the form of a meal. The format of the evening has remained very much unchanged since the first such meal, which was held by close friends of Burns, a few years after his death. Central to the meal is the haggis.

The haggis is a form of sausage made of sheep's heart, liver and lungs that is minced with onion and oatmeal. Traditionally this is then encased in sheep's intestines and boiled.

After cooking, the haggis is then brought into the room by the chef, accompanied by the sound of bagpipes.

Piping In Of The Haggis

The chairman, or an invited guest, then recites Robert Burns' poem, "Address To A Haggis". The haggis is then cut and served to the guests.

The haggis is served with "neeps and tatties". "Neeps" is mashed swede, and "tatties" is mashed potato.

After the meal, the evening continues with various speeches and toasts being drunk. The guests are entertained by the singing and recitals of Burns' poems.

Portrait Of Robert Burns
As all our videos are under 6 minutes in length, we sometimes cannot fit in all the great things we want to say. So here are bits that ended up on the cutting room floor, that we didn't want to throw away.

Beneath is the Robert Burns' poem "Address To A Haggis", which is recited before the haggis is cut and served during a Burns Supper. 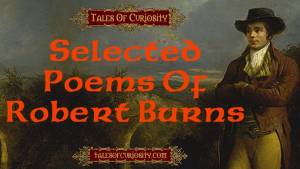 To accompany our Life and Times of Robert Burns video, we have selected three of his classic poems: Winter A Dirge, A Red Red Rose and finally Auld Lang Syne.
Wikipedia - Robert Burns
Privacy PolicySitemapAbout Tales Of Curiosity